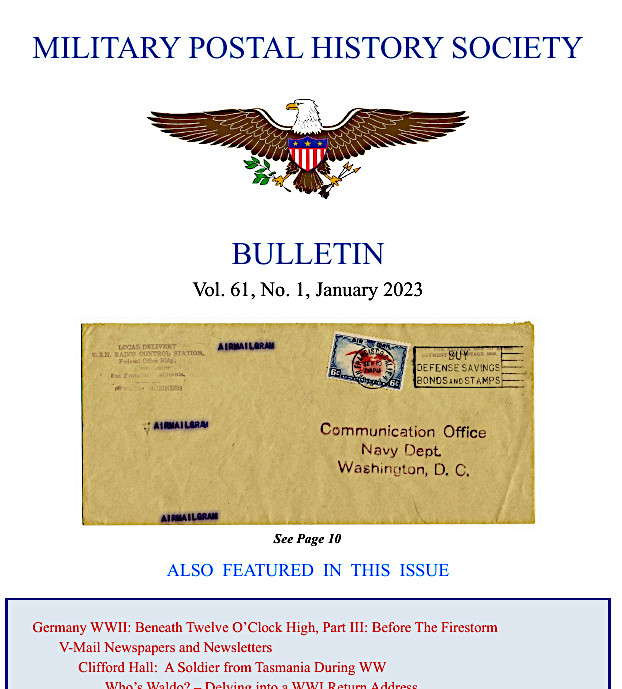 MPHS member Russ Carter has created a new master index of Bulletins from 1937 to 2022. See: the links to the Master Bulletin Index 1937-2022. The now superseded index listed at the bottom of this page will be retained until the new Index project is complete.

THE LATEST BULLETIN is available at this link

Featured articles in this issue include:

An Index of the War Cover Club, The War Philatelist and the Military Postal History Society bulletins remains online.

There is a webpage with content of the older Bulletin Index for the years 1937-2004.

The Military Postal History Society began as a small group of collectors meeting in May 1937 to form an informal War Cover Club and to provide information on military markings in a "War Cover Club" column in a Chicago publication called Postal Markings.


The club was formalized by adoption of a Constitution at a meeting in April 1938 during which a member's publication called "The War Cover Philatelist" was selected as the club's official bulletin.

Both publications ended during World War II due in part to restrictions on release of military marking information. The War Cover Club Bulletin reappeared in 1946 as an independent publication and continued until the name of the club, and its publication, was changed in mid-1991 to the Military Postal History Society. The quarterly issues of the Bulletin became identified by season beginning with Winter 1994.


The older index document, linked above, presents a listing of the articles both long and short, which have appeared in these publications during the period from May 1937 to the end of 2004.

Links are provided here for previous Bulletins by year: