War Ballots: Military Voting from the Civil War to WWII 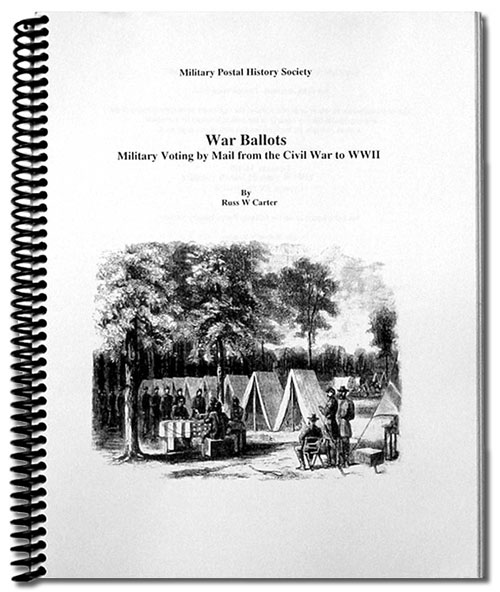 The War Ballot envelopes and cards, with those bright red stripes across the middle, have long been an enigma. They present the collector with a challenge in that they fall into a category that does not seem to fit anywhere very well. They are not postal stationery like a penalty cover. They were used by the Army, Navy, Marine Corps, Coast Guard, and even select civilians. Some were only used overseas while others were used everywhere. One can find them on a regular basis but are not available in great numbers. And finally, there has been no source of information to guide the collector until now.

This book starts out with Pennsylvania which allowed military voting in 1813 and proceeds to the Civil War where the laws of each state are discussed as to voting by mail. The story moves to the SpanishAmerican War and then to World War I with illustrations. Moving to World War II, numbers of military voters broken down by state are listed for the 1942 and 1944 elections with numbers of envelopes and cards used.

The book then moves to a short history of the War Ballot Commission and why it was formed in 1944. It takes a look at the politics behind the voting policies of each State and what Federal officials tried to do for the Armed Force voters in World War II.

The main emphasis of this work is in listing both the Federal and State envelopes and cards used to get election materials to and from the overseas soldier and sailor. First the Federal post card and then the Federal envelopes are detailed. Listings include the different printers, paper types, inks, delivery dates and other items with each cover being illustrated to help with identification. 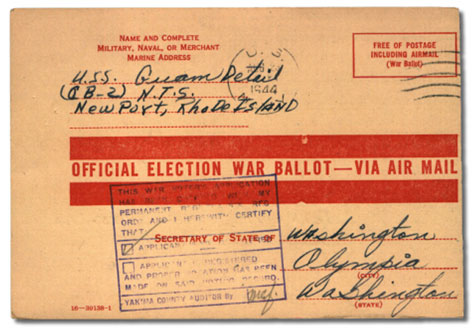 Next each State is listed with a compilation of the voting laws that affected how and why Armed Forces used the various methods for that State. Where a State used one envelope to send to a service man and another for return to the state, both envelopes are illustrated. Where a State used many different envelopes, several reported samples are illustrated. For example, the number of possible War Ballot envelopes used in Texas is at least 508 but only nine representatives are shown. When adding up all the possible State War Ballot envelopes, there are about 3,800 envelopes listed.

The book is 262 numbered pages with over 315 illustrations and nine charts plus two identification guides. It is 8.5 by 11 inches in size, spiral bound with clear vinyl cover.