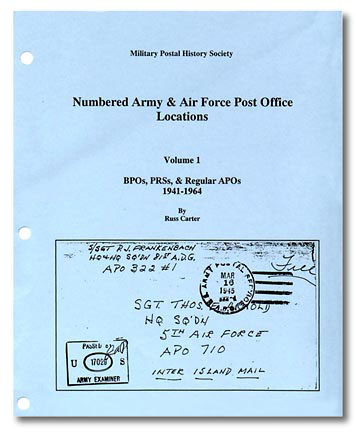 The 7th Edition of the Military Postal History Society's listings of military post offices is now available. Due to the amount of new information since the last edition, the book has been split into several volumes. This, the first of these volumes, deals only with the numbered permanent Army post offices from World War II until the start of the ZIP era. Many corrections have been made in this edition. The large number of additions is the result of extensive research in the National Archives and the Center For Military History along with the input from Society members.

Besides many new dates and locations, there are entries for APOs previously not known along with previously many unrecorded branches.

Some examples are: the previous edition had 34 Base Post Office entries while the new edition has 88 entries plus information on BPO detachments; the 1st BPO which had 2 lines now lists 25 lines and now known to be 3 different units; APO 196, which was on a ship, was listed with 5 locations and now lists 12 locations; APO 999, which previously had 4 sub unit entries now has 16 entries Changes and additions to Canadian, Alaskan, and Central American APOs is especially strong.

Many new APOs in India and post war Germany have been added. The section on APOs % PM Los Angeles is the most comprehensive and detailed listing ever published.

The book opens with an introductory chapter on the history of the Army Postal System, and how it worked with such things as listings of APOs used in US maneuvers, lists to help identify covers, and a description of the relationships between the pans of the Post Office Department and the Army. Next are chapters on the Base Post offices and Postal Regulating Stations with their histories, workings, and listings. The main body of work, over 240 pages, is the chapter on APOs with their listings And finally a country index of numbers listed.